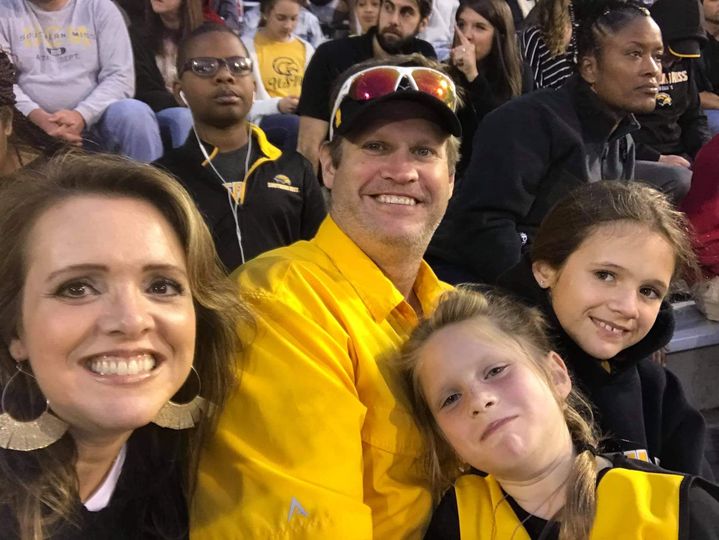 We had been trying to have a baby for three years. I was on fertility medicine, and someone congratulated me for being pregnant. The truth was that I knew something was wrong. When I would do situps and stretch afterwards, I felt like there was a “bubble”. I just hoped it was a baby…

But that congratulations was what I needed for me to go see the doctor. After doing a physical exam, he sent me to have a sonogram. Thankfully, my mom was with me when we found out that I had a nerf football-size cyst. There were other symptoms that were easy to ignore- like bloating, some heartburn, my cycle being irregular.

Surgery was scheduled, and I remember having to sign a permission slip for the doctor to be able to perform a hysterectomy if it came to that…

On the day of the surgery, my doctor removed my right ovary and fallopian tube. He still did not think it was cancerous, but when it came back three days later and was, he wished he had removed the left ovary too. But God knew!

I went to a gynecologist oncologist, who happened to be the brother of my junior high youth director, which was amazing and made it less scary. We decided to be aggressive because estrogen feeds ovarian cancer. If I wound up pregnant, that would have been a nightmare…

We did an exploratory debulking surgery, where my oncologist did 32 biopsies, getting my lymph nodes and “girdle”- where cancer loves to go first. Then I had 3 rounds of chemo.

My husband was my hero, and we shaved each other’s heads when I was losing my hair. It was easier to look alike at home, but I totally lived in wigs for a year.

We were so excited to put cancer behind us, and the Lord allowed us to have two miracle daughters. The first was after a failed attempt at in vitro and five total years of infertility. Our second daughter was conceived the very first month, which blew us away!

When the girls were two years old and 7 months old, I went in for a routine visit to my OB/GYN. She decided to do a sonogram “just to see” and make sure everything was alright. We found a tiny, strangely shaped cyst on my left ovary… We had known I would need to have a hysterectomy shortly after we had our children, but we weren’t prepared to face cancer again… already. I hadn’t even noticed any symptoms- except I realized that my cycle was irregular.

It was five years and one week between my cancer battles. We had just celebrated that milestone!

I had my hysterectomy, and I had three more rounds of chemo. I wasn’t allowed to hold anything over 20 pounds until 6 weeks after surgery, so I could only hold my baby if someone placed her in my lap. Thankfully, I did not have to lose my hair that time, so my girls didn’t really understand that I was sick. That chemo came with awful ulcers and strep throat-like symptoms, neuropathy, and many sleepless nights, but it could’ve been so much worse.

In both of my battles with cancer, we were incredibly blessed that they discovered it while I was still in Stage I. That was pretty unheard of. Also, I was 32 and 37 years old, and the average age for most women diagnosed with ovarian cancer is 63.

I am so grateful for God’s faithfulness and mercy, and I am humbled and amazed to report that I am now 8 years out from cancer.