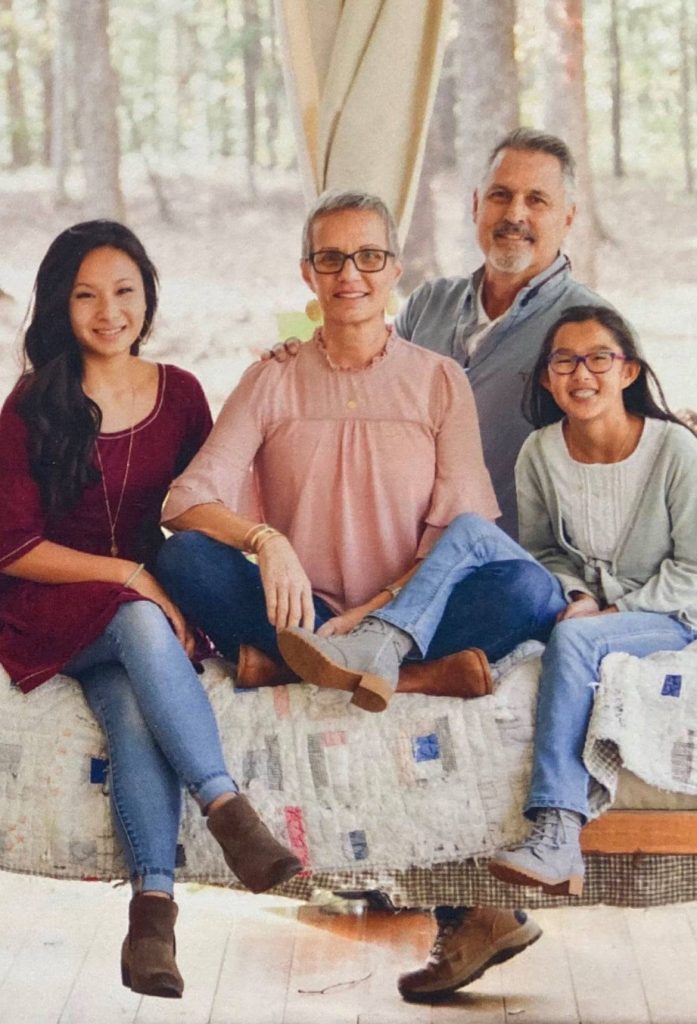 Andrea’s journey with cancer has started in November 2012. On her 50th birthday in 2012, she was diagnosed with breast cancer. She underwent a double mastectomy and reconstruction just a month later. Andrea remained cancer free for several years. Then in 2019 while she was vacationing in Ireland, she began to notice more frequent abdominal distention (bloating), frequent urination, intermittent nausea and at times it was hard to have a BM. It all seemed normal for a 56 year old women… Or so she thought?

She had a hysterectomy in 2002 and her ovaries were left per her doctors’ recommendation. She had no history in her family so leaving her ovaries would help with hormones regulation. She thought these symptoms were normal things that everyone has from time to time that are benign. Since she had no family history, the doctors did not see any red flags. She wasn’t your typical patient to present with ovarian cancer. She saw her GYN physician bi-annually and she had been to see them regarding this issue three times between October 2019 and January 2020.

On January 17, 2020 she woke up and felt a strange pulling in her left groin area. She then noticed that there was a lump. She called her doctor immediately as she knew that this was not normal. Her doctor wanted to see her as soon as possible for a pelvic ultrasound. The ultrasound alarmingly showed bi-lateral cysts on each ovary. One was 12cm and the other was 10cm. The doctors told her they were suspicious of ovarian cancer. She was beyond shocked. Not cancer again???

She did not know anyone with ovarian cancer and knew nothing about the disease. She just knew that the word cancer was not a good thing to hear. She lived a healthy active lifestyle and was just so confused. Are these doctors sure? So they performed a CA-125 blood test before she left the office. A CA-125 blood test referred to as a tumor marker and is used to try and recognize inflammation in certain parts of the body, but that number can increase from menstruation, pregnancy, and other things. CA-125 is not a great diagnostic test for OC. For women with Ovarian Cancer though, this is one of the only diagnostics available. A normal woman being screened would want their number to be under 35. Andrea was 76. So next came a CT Scan of her abdomen and pelvis.

Next were some hard decisions that were not easy to make:

• Choosing the right oncologist. She interviewed doctors at Emory, Piedmont, MD Anderson and Duke. She decided to choose Dr. McBroom at Piedmont because he was a pioneer in a surgical chemotherapy treatment for OC called HIPEC.

• In February of 2020 she was officially diagnosed with stage 3C Ovarian Cancer. She had to stop taking her medication for ADHD, being still was something she always struggled with. This year she had to be more still. In the stillness, God knew he could reach her at a level deeper than he ever had before. She realized that she needed him more than ever and he would be the only way she could weather this storm she was facing head on. A storm she could have never prepared herself for or fought on her own.

• Dear friends gathered with her husband Kent and waited as she underwent HIPEC at Piedmont in downtown Atlanta. HIPEC stands for Hyper-thermic Intraoperative Peritoneal Chemotherapy. The surgery took 9 hours followed by 3 days in ICU before she would be able to move to a regular room on the oncology floor.

• She had 12cm of her colon, 8cm of small bowel and half of her rectum removed. Her ovaries had clumped together and attached to her sigmoid region of her colon. She also had her omentum removed.

• They gave her an Ileostomy bag that she would have to wear for several months so her colon could heal.

• Chemotherapy followed every 21 days for the next 6 weeks.

• Grade 3 allergic reaction to the preservatives in Taxol, 1 of the chemotherapy that resulted in all of her cancer treatment going forward would be administered an impatient as well so they would have adequate staff there to take care her in case this happened again. There was nobody there to help you advocate for yourself, just you, because of Covid Restrictions in place

• She then had to see an allergist doctor that specializes in cases where the patients have allergic relations to chemo to look at ways for her to still be able finish this chemo regimen and its benefits.

• All 6 chemos were finished and now it was time to get back up on her own to feet.

• In September she was able to have her ileostomy bag revered.

• After recovery of all of this, its time to start Lynparza. She started her first dose on November 16. It is a parp inhibitor that has been used in abdominal cancers for some time, but ovarian is new to the list and we are incredibly grateful.

• Lynparza side effects can be rough, making you not hungry or feeling nauseous all the time. It is a lifesaving drug but, it comes with a hefty price tag and a slew of side effects. Many women tolerate it well, some are not so lucky. For now, we keep our fingers crossed and our eyes are looking up to our Lord. It is all in his hands anyways.

• January 2021 her scans were all clear. We are so proud of how Andrea fought through all of this and is still fighting everyday with medication side effects. We were so thankful for the scans to show that she was indeed NED (which means No Evidence of Disease).

• We must give all the glory to our Lord and Savior because HE has brought her through this storm. So for now Andrea is living her best life. She spends a lot of her quiet time with the Lord and ministering to others, and she is still really involved with some volunteer projects and missions. She finds ways to talk about the gospel throughout her day and is surly living for God in choices she makes. Her husband Kent, kids and granddaughter are her special people. She is so thankful for their prayers and support this last year.

“Andrea Sisler is a dear friend of mine that was brought to me as a gift from God. He knew I needed someone to go through this ovarian cancer with and Andrea and I were going through it at the same time. She has been a huge blessing to me and she has also helped me grow my faith and focus on the positive parts of this journey, even when I could barely see anything positive, she would assure me that God was still with me and had never left and would never leave me. Andrea is my angel on earth!”- Kim Airhart